It’s mostly familiar faces (or should we say covers?) for August’s bestseller snapshot at Magers and Quinn. The one new face is a new novel, J. Ryan Stradal’s Kitchens of the Great Midwest. Tons of indie bookseller buzz, plus a great event in the store, propelled the novel to the number two spot.

But nothing could top Between the World and Me, which jumped to the top of the list, while Go Set a Watchman slid a bit, down to number six. This is most likely because so many shoppers got their new Harper Lee hardcover within the first week after it published. 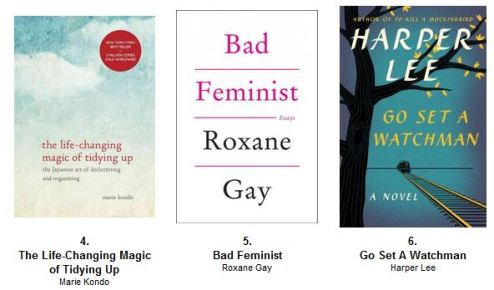 The Martian, Andy Weir’s excellent debut sci-fi novel, has been on our bestseller wall in the store consistently since it published in 2014, but the sales got a bump recently when the full trailer for the upcoming movie was released. (Spoiler alert: IT LOOKS AWESOME.)

The beginning of a new school year, whether for you or your kids, can feel even more like a “new year” than January 1st; we make goals and vow that we will finally get – and stay – organized. This might explain the resurgence of Marie Kondo’s The Life-Changing Magic of Tidying Up, which has been selling steadily at the store, but had been out of the top six for the past few months.

We hope you enjoyed this look into the ups and downs of the bestselling titles here at the store. See you next month!