As part of this month’s Notable Community Reader Series, we heard from Minneapolis-based artist Jim Keefe. Currently the artist of Sally Forth, Keefe is also the writer and artist of the Flash Gordon comic strip (both are available at DailyInk.com). A graduate of the Joe Kubert School, Keefe also teaches Comic Art. His teaching and speaking engagements have included the School of Visual Arts in Manhattan, Hofstra’s UCCE Youth Programs, the University of Minnesota, and most recently, the Minneapolis College of Art and Design.

Jim was kind enough to share some of his favorite books, focusing his recommendations on comics and their creators: 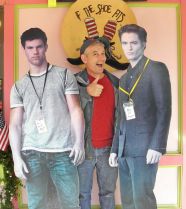 Bill Mauldin: A Life Up Front, by Todd Depastino

Bill Mauldin is probably best known for his WWII cartoons featuring Willie and Joe. Meant for the front line soldiers they portrayed, the cartoons gave people stateside a little clearer window into the GI’s world. Mauldin would go on throughout his career to speak out for the little guy, and to also skewer anyone in a position of power that needed a kick in the ass.

Marvel Comics – beyond the facade that Stan Lee has presented as pitchman for the company. Howe’s book is an in-depth and well-researched account of the company’s inner workings, warts and all.

Leaping Tall Buildings showcases some of the best and most influential creators throughout the comic industry’s history. Seth Kushner’s photographs are worth the price of admission alone.

A book on “how to create comics” for people who can’t be bothered with just getting their feet wet – a veritable wealth of information.

Graphic Novels: Everything You Need to Know, by Paul Gravett

For the comic enthusiast who may be unfamiliar with what the medium has to offer. Gravett covers the popular mainstays along with recommendations broken down into different genres – a great resource guide.

It Was the War of the Trenches, by Jacques Tardi

An uncompromising look at World War I trench warfare. Through a series of vignettes Tardi deglamorizes the war and shows the inhumanity, insanity and hell of it all.

Available for the first time in a large treasury edition, Dave Stevens hits it out of the park with this action packed, beautifully illustrated comic masterpiece.

Born a Polish Jew, Joe Kubert (Fax from Sarajevo, Sgt. Rock) imagines what would have happened had his family NOT been able to immigrate to America when he was born – and what life would have been like under Nazi rule.

From Hell, by Alan Moore and Eddie Campbell

Alan Moore (Watchman, V for Vendetta, League of Extraordinary Gentlemen) tells the story of Jack the Ripper. Moore weaves a vast tapestry of events into a story that lays bare the mind of a madman. Masterfully illustrated by Eddie Campbell.

Caitlin Skaalrud is a Minneapolis-based cartoonist and graduate of MCAD. This Xeric Award winning graphic novel is published by her own comics micro-press, Talk Weird Press. An amazing talent and an amazing book.

Earlier this month, we asked our social media followers if they'd set any reading goals or challenges for themselves for 2023. We got some great responses, and will be highlighting recommendations for several of them to keep you inspired! First up: one great response was from a reader who plans to read 20 books by Black women this year. With Black History Month coming up soon, it's a great time to take a page from this reader's book (pun intended)!
This week's rare book spotlight is a special one! This is a first edition copy of Willa Cather's book, My Ántonia. Willa Cather is one of the great American novelists of the early 20th century, so we couldn't wait to share this one with the literary collectors out there!
This Rare Book Thursday, we'd like to feature Henri Rousseau: Archaic Naiveté! This book features the works of French Painter Henri Rousseau that were part of the archaic trend. If you're looking for an ✨aesthetic✨ coffee table book, this is definitely it. A full condition report is available on our website (link in bio.)
Whether you like to reinvent yourself completely in the new year or you are just looking for a few new ways to practice some self care, Uptown has got your back!
Back again to grace your feeds with another rare and collectible book! This week we would like to highlight this copy of the children's classic, A Wrinkle in Time, which has been signed by Madeleine L'Engle herself!
In honor of House Plant Appreciation Day, here are a few of our favorite books on house plants 🪴🌿🌵And don't worry, plant parents - there's plenty more where that came from. We have an entire section for "container gardening!"